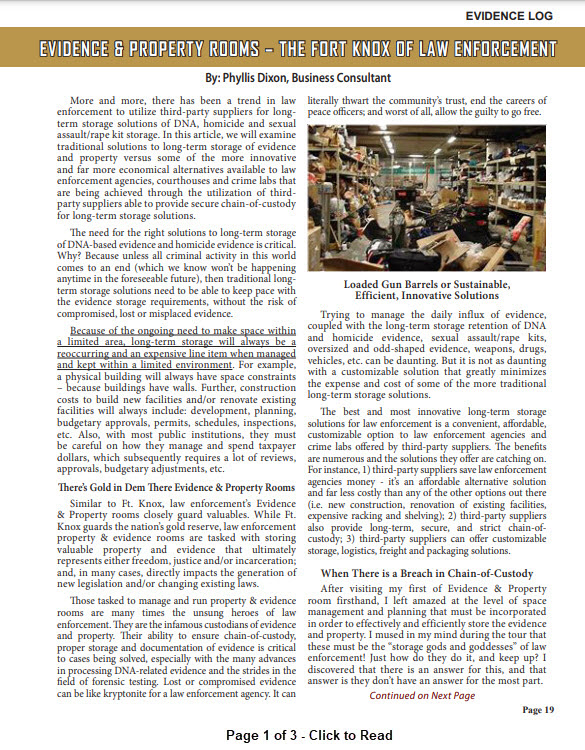 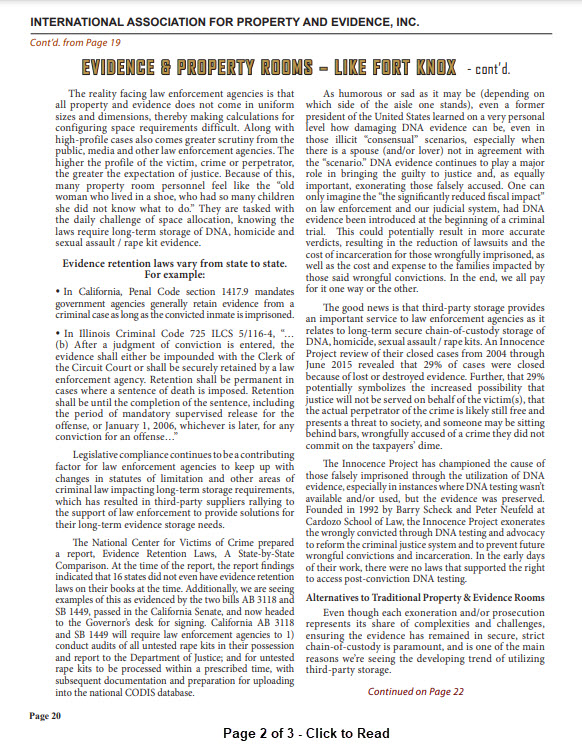 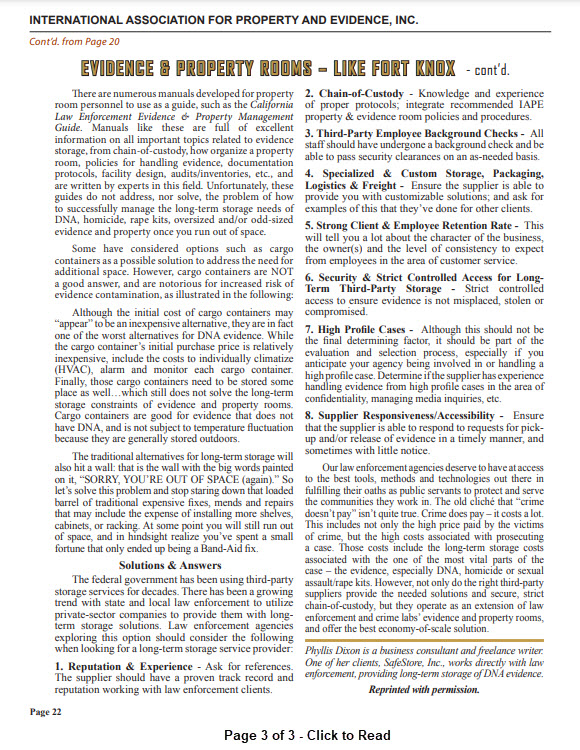 More and more, there has been a trend in lawenforcement to utilize third-party suppliers for long-term storage solutions of DNA, homicide and sexual assault/rape kit storage. In this article, we will examine traditional solutions to long-term storage of evidence and property versus some of the more innovative and far more economical alternatives available to lawenforcement agencies, court houses and crime labs that are being achieved through the utilization of third-party suppliers able to provide secure chain-of-custody for long-term storage solutions.

The need for the right solutions to long-term storage of DNA-based evidence and homicide evidence is critical. Why? Because unless all criminal activity in this world comes to an end (which we know won’t be happening anytime in the foreseeable future), then traditional long-term storage solutions need to be able to keep pace with the evidence storage requirements, without the risk of compromised, lost or misplaced evidence.

Because of the ongoing need to make space within a limited area, long-term storage will always be areoccurring and an expensive line item when managed and kept within a limited environment. For example,a physical building will always have space constraints– because buildings have walls. Further, construction costs to build new facilities and/or renovate existing facilities will always include: development, planning, budgetary approvals, permits, schedules, inspections, etc. Also, with most public institutions, they mustbe careful on how they manage and spend taxpayer dollars, which subsequently requires a lot of reviews, approvals, budgetary adjustments, etc.

Those tasked to manage and run property & evidence rooms are many times the unsung heroes of lawenforcement. They are the infamous custodians of evidence and property. Their ability to ensure chain-of-custody, proper storage and documentation of evidence is critical to cases being solved, especially with the many advances in processing DNA-related evidence and the strides in the field of forensic testing. Lost or compromised evidence can be like kryptonite for a law enforcement agency. It can literally thwart the community’s trust, end the careers of peace officers; and worst of all, allow the guilty to go free.

Trying to manage the daily influx of evidence, coupled with the long-term storage retention of DNA and homicide evidence, sexual assault/rape kits, oversized and odd-shaped evidence, weapons, drugs, vehicles, etc. can be daunting. But it is not as daunting with a customizable solution that greatly minimizes the expense and cost of some of the more traditional long-term storage solutions.

When There is a Breach in Chain-of-Custody

After visiting my first of Evidence & Property room first hand, I left amazed at the level of space management and planning that must be incorporated in order to effectively and efficiently store the evidence and property. I mused in my mind during the tour that these must be the “storage gods and goddesses” of lawenforcement! Just how do they do it, and keep up? I discovered that there is an answer for this, and that answer is they don’t have an answer for the most part.

The reality facing law enforcement agencies is that all property and evidence does not come in uniformsizes and dimensions, there by making calculations for configuring space requirements difficult. Along with high-profile cases also comes greater scrutiny from the public, media and other law enforcement agencies. The higher the profile of the victim, crime or perpetrator, the greater the expectation of justice. Because of this, many property room personnel feel like the “old woman who lived in a shoe, who had so many children she did not know what to do.” They are tasked with the daily challenge of space allocation, knowing the laws require long-term storage of DNA, homicide andsexual assault / rape kit evidence.

Legislative compliance continues to be a contributing factor for law enforcement agencies to keep up with changes in statutes of limitation and other areas of criminal law impacting long-term storage requirements,which has resulted in third-party suppliers rallying tothe support of law enforcement to provide solutions for their long-term evidence storage needs.

The National Center for Victims of Crime prepareda report, Evidence Retention Laws, A State-by-State Comparison. At the time of the report, the report finding sindicated that 16 states did not even have evidence retention laws on their books at the time. Additionally, we are seeing examples of this as evidenced by the two bills AB 3118 andSB 1449, passed in the California Senate, and now headed to the Governor’s desk for signing. California AB 3118and SB 1449 will require law enforcement agencies to 1) conduct audits of all untested rape kits in their possession and report to the Department of Justice; and for untested rape kits to be processed within a prescribed time, with subsequent documentation and preparation for uploading into the national CODIS database.

As humorous or sad as it may be (depending onwhich side of the aisle one stands), even a former president of the United States learned on a very personal level how damaging DNA evidence can be, even in those illicit “consensual” scenarios, especially when there is a spouse (and/or lover) not in agreement with the “scenario.” DNA evidence continues to play a major role in bringing the guilty to justice and, as equally important, exonerating those falsely accused. One can only imagine the “the significantly reduced fiscal impact” on law enforcement and our judicial system, had DNA evidence been introduced at the beginning of a criminaltrial. This could potentially result in more accurate verdicts, resulting in the reduction of lawsuits and thecost of incarceration for those wrongfully imprisoned, aswell as the cost and expense to the families impacted bythose said wrongful convictions. In the end, we all payfor it one way or the other.

The good news is that third-party storage provides an important service to law enforcement agencies as itrelates to long-term secure chain-of-custody storage of DNA, homicide, sexual assault / rape kits. An Innocence Project review of their closed cases from 2004 through June 2015 revealed that 29% of cases were closed because of lost or destroyed evidence. Further, that 29% potentially symbolizes the increased possibility that justice will not be served on behalf of the victim(s), that the actual perpetrator of the crime is likely still free and presents a threat to society, and someone may be sitting behind bars, wrongfully accused of a crime they did not commit on the taxpayers’ dime.

The Innocence Project has championed the cause of those falsely imprisoned through the utilization of DNA evidence, especially in instances where DNA testing wasn’t available and/or used, but the evidence was preserved.Founded in 1992 by Barry Scheck and Peter Neufeld at Cardozo School of Law, the Innocence Project exonerates the wrongly convicted through DNA testing and advocacy to reform the criminal justice system and to prevent future wrongful convictions and incarceration. In the early days of their work, there were no laws that supported the right to access post-conviction DNA testing.

Even though each exoneration and/or prosecution represents its share of complexities and challenges, ensuring the evidence has remained in secure, strictchain-of-custody is paramount, and is one of the main reasons we’re seeing the developing trend of utilizing third-party storage.

There are numerous manuals developed for property room personnel to use as a guide, such as the California Law Enforcement Evidence & Property Management Guide. Manuals like these are full of excellent information on all important topics related to evidence storage, from chain-of-custody, how organize a property room, policies for handling evidence, documentation protocols, facility design, audits/inventories, etc., and are written by experts in this field. Unfortunately, these guides do not address, nor solve, the problem of how to successfully manage the long-term storage needs of DNA, homicide, rape kits, oversized and/or odd-sized evidence and property once you run out of space.

Some have considered options such as cargo containers as a possible solution to address the need for additional space. However, cargo containers are NOT a good answer, and are notorious for increased risk of evidence contamination, as illustrated in the following:

Although the initial cost of cargo containers may “appear” to be an inexpensive alternative, they are in fact one of the worst alternatives for DNA evidence. While the cargo container’s initial purchase price is relatively inexpensive, include the costs to individually climatize(HVAC), alarm and monitor each cargo container. Finally, those cargo containers need to be stored some place as well...which still does not solve the long-term storage constraints of evidence and property rooms. Cargo containers are good for evidence that does not have DNA, and is not subject to temperature fluctuation because they are generally stored outdoors.

The traditional alternatives for long-term storage will also hit a wall: that is the wall with the big words painted on it, “SORRY, YOU’RE OUT OF SPACE (again).” Solet’s solve this problem and stop staring down that loaded barrel of traditional expensive fixes, mends and repairs that may include the expense of installing more shelves, cabinets, or racking. At some point you will still run out of space, and in hind sight realize you’ve spent a small fortune that only ended up being a Band-Aid fix.

Our law enforcement agencies deserve to have at access to the best tools, methods and technologies out there in fulfilling their oaths as public servants to protect and serve the communities they work in. The old cliché that “crimedoesn’t pay” isn’t quite true. Crime does pay – it costs a lot. This includes not only the high price paid by the victims of crime, but the high costs associated with prosecuting a case. Those costs include the long-term storage costs associated with the one of the most vital parts of the case – the evidence, especially DNA, homicide or sexualassault/rape kits. However, not only do the right third-party suppliers provide the needed solutions and secure, strict chain-of-custody, but they operate as an extension of lawenforcement and crime labs’ evidence and property rooms, and offer the best economy-of-scale solution.